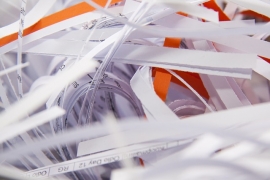 The paper shredder – this is probably one of the most beautiful and useful machines that man had invented. Paper shredders are very important nowadays. It is used to destroy confidential documents such as bank transactions, medical records, and others of their likes. But have you ever wondered how the paper shredder came to be?

Before the Paper Shredder

Before the paper shredder, there has already been that need to destroy paper. A paper has to be destroyed especially if one considers the writings on that paper to be very dangerous. For example, during the Second World War era, the Nazis burned all papers, books, and documents pertaining to themes which they regarded as unhealthy.

Sometimes, papers are burned simply because their contents are vital to one or a number of people’s safety. So many times and in numerous accounts have soldiers burned important documents that have something to do with their intelligence operations. They do not want the info written on those papers to be passed on into the hands of their enemies.

But there have been instances when important papers have been destroyed out of pure barbarism. A good example would be that of the Library of Alexandria – a library that contained more than 500,000 important documents which was believed to have been burned by Muslim conquerors of Egypt.

The Birth and Evolution of the Paper Shredder

The very first paper shredder can be attributed to Abbot Augustus Low. His invention, which he referred to as the waste paper receptacle has been patented in February of 1909. But he died without his invention being reproduced. Then, in Germany in 1935, Adolf Ehinger was able to create a paper shredding machine which is based on the mechanism of a pasta maker. Soon, he was able to market is invention to numerous companies. Government agencies start to make use of strip-cut paper shredders as they deemed the destruction of important files essential. The rise of topics such as anti-burning advocacies, identity thefts, and garbage disposal issues eventually made it necessary for private citizens to have their own paper-shredding machines.

The Different Types of Paper Shredders

From the time the paper-shredder was born until today, the machine has been made available in so many types. Paper shredder machines have been classified based on their size as well as the sizes of paper pieces that they have produced. Here are some of the most popular types of paper shredders:

Do you need confidential documents and other important papers to be destroyed? You can count on Shred All Secure Document Destruction for that!

If you would like a free trial of our on-site document shredding service at your office, call 519-418-2448 or apply online today.

Contact us today for a complimentary on-site shredding appointment at your business.

Contact us today to learn how Shred All can save your company time and money. Contact Us